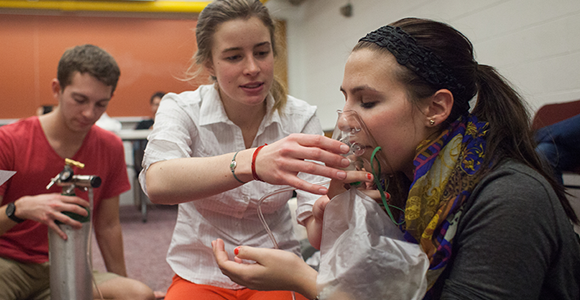 Whether you’re playing sports, listening to blues while eating ribs, or graduating, UChicago Emergency Medical Services is there to keep you safe.

In late 2007, graduate student Amadou Cisse was shot during a robbery at 61st and Ellis. His death shook the University community; it also spurred some students into action. They started a new Recognized Student Organization: the University of Chicago First Responder Corps (UCFRC).

Every minute that someone in a life-threatening emergency doesn’t get help, the chance of survival drops precipitously. So UCFRC hoped to create a cadre of volunteers that could respond swiftly to emergencies on and around campus.

The group began training students in fall 2008; but by 2011, unable to negotiate the tortuous but necessary red tape that would allow them to put their skills into practice, they had to give up on their original idea. Then Jonathan Warczak, AB’12, joined the UCFRC board. He spent a year gaining University, city, and state approvals, which required creating University of Chicago Emergency Medical Services (UCEMS) as a distinct entity under the UCFRC umbrella. The new group’s first event—Warczak’s first and last—was the June 2012 convocation. He took the early shift (5:45 to 11 a.m.): “I literally switched out of my UCEMS uniform into my cap and gown.” He and the other volunteers helped 50 convocation goers, treating an ankle injury, an allergic reaction, and several heat-related illnesses; one unconscious person was taken to the hospital.

After Warczak’s departure, UCEMS chief Katrina Sondermann, AB’13, and assistant chief Adrian Gomez, ’14, spent the summer of 2012 putting the group’s permanent structure into place—“all those little details,” Sondermann says. “What are our drills like? How many people can respond? How do you become a crew chief?” The group drills every Sunday evening at Henry Crown. Situations they prepare for include acute ethanol intoxication, anaphylaxis, emergencies (airway management and respiratory; behavioral; endocrine; environmental; head, neck, and spinal; orthopedic; penetrating traumatic), hemorrhage, and mass casualty incidents.

The things they carry

The unit’s biggest save came at an intramural game (well trained in patient confidentiality, volunteers can’t reveal which sport) where a student was complaining of ankle pain. “Our responders decided to do a full assessment of her,” says Sondermann, “just to make sure that was really all that was going on.” They saw several signs hinting at a concussion and urged the student to go to the hospital, where she was admitted for several days. If they hadn’t sent her to the hospital, Sondermann says, “she likely would have died from the concussion.”

Updated 02.11.2014 to reflect a correction about the origins of UChicago Emergency Medical Services.