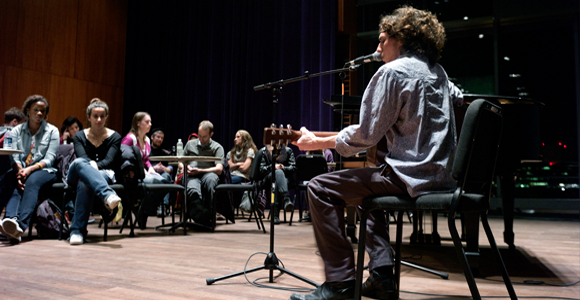 An evening at the cabaret

No wine but lots of women and song.

As someone who filters experience through cinematic references, an invitation to the Logan Center Cabaret series brings to mind smoky basements and speakeasies, Marlene Dietrich in Der Blaue Engel, and Liza Minnelli in Cabaret. But the ninth floor Performance Penthouse channels a different era: perhaps the lakefront condo in The Bob Newhart Show, all ’70s dark wood paneling and twinkling city lights. Take a seat and a slice of pizza, Meine Damen und Herren: the show is about to go on.

The audience is in a quiet mood this October evening. The first performer, a pianist-singer who wishes to remain anonymous in print, throws down the gauntlet: “This is going to require some audience participation.” There’s a palpable pause. “I need you to give me a beat.” The audience tries, but after several false starts someone suggests she should go ahead on her own. At the piano she conjures Amy Winehouse conjuring slow and velvety blues divas, with a voice that seems to command the insulated silence of a recording studio; she has a CD coming out soon. The emcee for the evening, second-year Elisabeth Del Toro, has no trouble getting two rounds of applause.

Second-year Eva Kinnebrew begins by thanking her RA for lending her a guitar, then sings in a spare, wistful, bright-eyed style about “the silly lies my parents told me” to make her feel safe in the dark.

Del Toro doesn’t have a bio for the next performer, second-year Jake Araujo-Simon, but knows him from class: “He’s always raising his hand and it’s always relevant.” He launches into an Elton John cover that goes smashingly until his guitar strap comes loose; he mutters an apology and moves to the piano. “I spend a lot of time improvising,” he says. “Sometimes it’s shitty. Sometimes it’s intentionally atonal; sometimes it’s unintentionally atonal.” In fact he plays a few lovely minutes reminiscent of Debussy.

Araujo-Simon was supposed to be the last act, but an energetic fellow from the Illinois Institute of Technology strides in, having mistaken the event for an open mic, and no one turns him away. With a goatee and mane of hair, Kaleb Shafa looks every bit the garage rocker he claims to be. He sings of cold winds that slap you in the face and the only girl he’s ever loved (back in Florida), interspersed with four or five reminders that he has music on Spotify.

Despite my associations of cabaret with a more glamorous era, I had expected something along the lines of David Letterman’s stupid pet tricks. Instead I found the talent on display to be earnest and inspiring. All in all, a soulful, somewhat nostalgic evening.

Left: Kaleb Shafa of the Illinois Institute of Technology sings about love and loss. (Photography by Carlos Javier Ortiz)

Below: Sound engineer Cameron Day, ’16, adjusts the volume of the background music before the show begins. (Photography by Carlos Javier Ortiz)