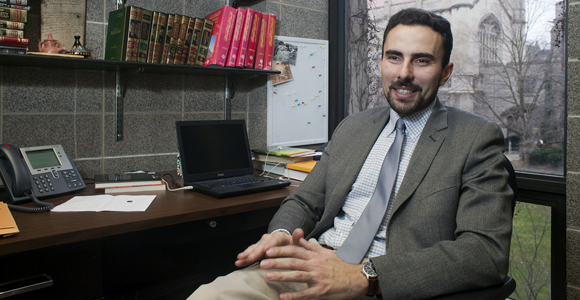 An Islamic Studies professor takes his students on a wild ride—sometimes via donkey.

Edited and adapted by Jeanie Chung

Ahmed El Shamsy, who joined UChicago in 2010 as assistant professor of Near Eastern languages and civilizations, has taught in the Civilizations Abroad program in Morocco (Winter 2012) and Cairo (Winter 2013). Though primarily a classicist, he teaches courses on all aspects of Islamic thought. His first book, The Canonization of Islamic Law: A Social and Intellectual History (Cambridge University Press), came out in October. During the Cairo program he took his students to visit his parents, Mohamed and Margaretha, on their farm in the Nile Delta, about two and a half hours outside the city. (The Cairo program is temporarily being taught at the University’s Center in Paris.)

How did your parents feel about having 25 American students come over?

They live in a small village, but they also like to have visitors. We have a big farm; the students got to ride donkeys. If these had been Americans abroad on a rampage, I wouldn’t have taken them to see my parents. But the thing I like about teaching Study Abroad is that they are very mature, very curious, very intelligent young people. I’ve taught both in Morocco and in Cairo, and both times it’s been a real pleasure.

This was before the July 2013 coup, but obviously there was a lot of political unrest in Cairo. Did you feel unsafe?

No. There were demonstrations, but those were limited. The students said afterward they felt much safer in Cairo than they feel here in Chicago. The women students said they had no problems going out at 2 a.m., for example.

What’s your favorite thing to do in Cairo?

I’m not such a huge fan of megacities. But there is the Sultan Hassan Mosque, where I also took our students. It’s a beautiful architectural building, and it has amazing acoustics. The caretaker has an incredible voice. Every time I take a group there, he recites something in Arabic, and it’s just amazing. This is basically in the middle of the city, but if you’re inside, it has an interior courtyard, and you don’t hear cars. It’s like you’re in a different world.

Despite tremendous growth in the Islamic Studies field in recent years, there are still a lot of misconceptions about Islam. Do even thoughtful, open-minded University of Chicago students come in with preconceived notions?

I’m again and again surprised at how nice it is to teach University of Chicago students and how willing they are to read what I give them and engage with these ideas. What I really like about undergraduates here—and it’s partly because we have a relatively small department—is that we don’t treat them differently from graduate students. Because we only have about a dozen majors a year, they read at the same level, discuss at the same level.

I also learn things from my students. I wrote an essay [“Sisi, Nasser, and the Great Egyptian Novel”] on current cultural politics inspired by a paper that an undergraduate had written in my Islamic Thought and Literature course in Spring 2013, before the military coup. I taught the novel Zayni Barakat [Penguin, 1990], by Gamal al-Ghitany, which is about military rule and suppression in the ’60s and considered a novel against totalitarianism. But now al-Ghitany has taken a promilitary coup stance. My student said, “You know, this is actually not as most people read it. There are undercurrents that are quite troubling already.”

How do you bring eighth- and ninth-century texts to life for your students?

I try to allow the ancients to speak for themselves by having students read original sources directly, whether in Arabic or in translation. Of course students often need context to understand these sources fully, but I am again surprised by how quickly they grasp the various messages that these people from faraway times and places are trying to convey.

Ahmed El Shamsy, whose office is in Pick Hall, also holds an appointment with the Divinity School. (Photography by Carlos Javier Ortiz)