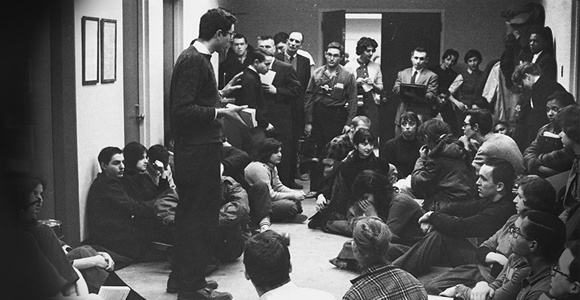 A little bite of the fame machine

This issue’s alumni question: What famous person did you meet while you were in the College?

During the infamous (1969) sit-in at the Ad Building, Pete Seeger visited and sang a few songs.

But what he did just before he left, I remember acutely. We had been crowded around him, finding space on the floor we had made filthy with our detritus—cigarette butts, wrappers, garbage. Seeger said something like this: since the Ad Building was now our home, we should treat it respectfully. He asked each of us before we arose to pick up some of the discards around us—to clean our space. He did so as he spoke. Then he left. But he left us with a message that remained well after the useless sit-in had ended.

I had two encounters with Carl Sagan (AB’54, SB’55, SM’56, PhD’60) during my U of C student days. The first was at a lunch at B-J during the placement exams I took in January of 1952. He said he was going to Purdue for the weekend, and I stupidly assumed it was to attend some athletic or social affair. Instead it was to study kinetics with a professor there.

The second was on the basketball court at the old field house in 1954. He was playing for his dorm team, and I was the referee. He was overly aggressive in complaining about adverse calls, and after a warning and technical foul, I invited him to take a seat on the bench.

I hired Paul Butterfield (U-High’60) and his blues band to play at one of my fraternity’s parties sometime in the late ’50s (the Old Beta Theta Pi chapter, now alas long gone, had some really groovy gigs). As I recall, the band was fantastic and would take breaks in our car park behind the chapter house. The air was pungent with the aroma of a certain substance.

Mike Seeger, popular singer and half brother of Pete, was strumming a heavenly sounding instrument in his room at International House, where I resided. I tapped on the door. “Whazzat?” I asked. He replied that it was an Autoharp. Went and got my buddy from down the hall, and together we enjoyed a ten-minute private concert in Mike’s room.

Mike Bloomfield, iconic guitarist who performed in the Butterfield Blues Band, was the other guy on a double date. He allowed as how his parents gave him a choice: music or the family business. The latter included restaurant supplies, especially salt-and-pepper shakers, nearly all of which had a B embossed on their bottoms. Mike chose music.

Elvin Bishop (X’64), another blues musician, was in my class. A bunch of us hard-studying guys engaged in some marathon poker sessions, and, as I recall, Bishop lost his guitar after one spectacular deal when, I think, five aces took the pot.

During my first year as a graduate student in anthropology, Margaret Mead was invited to lecture. She had recently returned from a revisit, after 25 years, to Papua New Guinea to examine social and cultural changes of the Manus people—several of which were a result of contact with Americans after World War II.

While she was clearly immersed in her work, it emerged during the question-and-answer period that she would rather be researching child development, but the study of social change was of primary importance to the American government.

Many years later, Mead and I met again during a conference in Washington, DC, at which she was again the featured speaker. We talked about a cousin of mine who had worked in her office at the American Museum of Natural History in New York. Mead had used my cousin as an informant about the kinship system of my large extended family.

My brush with fame? I entered the College in the fall of 1974. I moved in to Upper Rickert House of Woodward Court, which occupied the spot where Chicago Booth’s Harper Center now stands. Another student entering the College at the same time moved into Lower Rickert and became my lab partner in Physics 121. A good guy, we were friendly, though with some interhouse rivalry. I should have done much more to ingratiate myself with him. To whom do I refer? Joe Mansueto (AB’78, MBA’80), founder of the Morningstar investment research corporation, who funded the Mansueto Library.

The next Short Answer question will be announced in the March issues of the UChicago News for Alumni & Friends e-newsletter.

A shorter, tidier sit-in: Bernie Sanders, AB’64, speaks to protesters during the Committee on Racial Equality’s sit-in of the Administration Building in 1962. Sanders, an independent, is now the junior US senator from Vermont. (University of Chicago Photographic Archive, Special Collections Research Center)