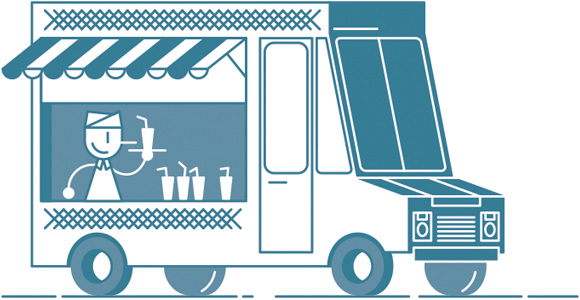 In 2011, College web manager Avi Schwab, SB’03, began tracking Hyde Park food trucks under Twitter handle @UChiNOMgo. Since 2012, when a new city ordinance allowed trucks to cook food to order, trucks have boomed on Ellis between 57th and 58th—thanks partly to Schwab’s feed, which has 2,771 followers. “It’s a lot of responsibility, but I'm happy to bear the weight,” he jokes. Schwab served up his favorites, in no particular order:

“They cook 60 pounds of bacon a day, and they deep-fry it. The sandwich is on two big pieces of challah, and it’s insane.”

“It’s pulled pork with pickled red onions and habaneros. Get it with the guacamole and chips, which are served warm.”

“Chicago deep dish. It starts with a great crust, then a light layer of cheese, and finishes with an amazing fresh tomato sauce and toppings.”

“These guys are always amazing. For the chocolate powdered, they take the doughnuts out of the fryer and toss them in powdered chocolate and sugar. The doughnut melts in the chocolate.”

“I try to not really do cupcakes that much because I really don’t need to be eating cupcakes, but pretty much every time they’re here I have a maple bacon cupcake when they have it. Put it in the microwave for ten seconds first.”

“It’s a ton of spinach and béchamel cheese sauce packed into a little amazing crust. They actually went to England and won a couple of awards for British pies. They have an amazing little cube truck too—it’s about the size of a smart car.”

“They do a combo that’s rib tips and jerk chicken, and it has collards and mac and cheese with it, and there’s the barbecue sauce, and you mix it all together. You come out all messy and covered in sauce. They’re one of the most underrated trucks.”