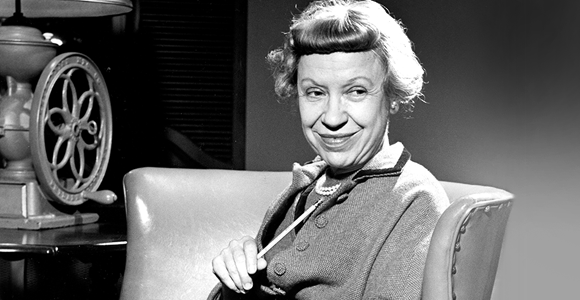 “The thing is, I have this lifelong habit of writing, as people do, to see what I have to say.”—Helen Bevington, PhB’26

Helen Smith Bevington (1906–2001) didn’t lack for things to say. Over the course of her more than 50-year literary career, she found her voice in the poems she wrote for the New Yorker and the Atlantic, book reviews in the New York Times, and books of essays and memoirs. She wrote with passion and liveliness about childhood, marriage, grief, love, poetry, and the lifelong quest for what she called “a third way, of neither solitude nor despair.”

“She made an awful lot out of her talent,” says her son David Bevington, professor of English and editor of the Bantam Shakespeare.

Helen Bevington’s life was rich with material for a memoirist. Her parents’ tense marriage dissolved shortly after her birth, when her mother discovered that her father, a Methodist minister, had been conducting an affair with a young member of his congregation. The scandal left Helen’s father without a job and Helen and her mother homeless and nearly penniless.

Helen’s tumultuous childhood became the subject of the 1965 memoir Charley Smith’s Girl (Simon and Schuster), which described the hardships she and her mother faced after the divorce and the gradual disintegration of Helen’s relationship with her father. A Chicago Tribune reviewer praised Charley Smith’s Girl for its “unadorned honesty,” which was, he wrote, “chilling at times, but it also gives an air of realism which is curiously powerful.”

The public library in Worcester, New York, where much of the book’s narrative takes place, banned Charley Smith’s Girl, but David Bevington—who considers it among his mother’s finest works of prose—says the unconventional Helen was not cowed. “She was rather proud of that,” he said. “I think she enjoyed the scandalous aspect.”

Helen attended Elmira College in upstate New York before transferring to the University of Chicago in 1924. The experience was everything she had craved after her traumatic childhood:

“I couldn’t have been happier at the University,” she wrote in Charley Smith’s Girl. “From the start it gave me bountifully what I wanted: it taught me and let me alone.”

She enrolled at Columbia University for graduate school in English. Her classmates included Merle Bevington, a former high school teacher who abandoned Columbia’s graduate program in mathematics to study English literature instead. He proposed the morning after their first date, but it was more than a year before Helen—who had vowed never to marry—finally accepted.

While Merle taught at New York University, Helen found a desk job that left her with spare time to write light verse in the style of E. B. White and Ogden Nash:

Henry Adams once debated
Whether or not he was educated.
It took 500 pages to give
The answer in the negative.

In the early days, she didn’t take her own work terribly seriously. “The thing I was up to seemed fairly harmless,” she recalled later. “A verse is a verse. Mine were only a kind of notation.”

In 1942 Merle accepted a position on the Duke University English department faculty, and the Bevington family—which by then had grown to include David and his younger brother Philip—moved to North Carolina. They settled in a secluded home on four and a half acres of land in a rural area outside Durham.

Before long Helen too began to teach at Duke, a remarkable achievement for a woman with only a master’s degree. She was, David says, a demanding teacher of modern poetry (her students nicknamed her course “Hell on Wheels”) but “students tended to adore her.”

In Durham her poetry career flourished. When Merle saw an advertisement in the Atlantic for a poetry contest cosponsored by Houghton Mifflin, he encouraged his wife to submit her work. The prize board’s response surprised everyone. The contest, they informed her, was for serious poetry, so they could not consider her work—but would she be mollified by a book contract and a New Yorker contract? She happily assented, and throughout the war years her poems appeared in the magazine nearly every other week.

Gradually, Helen’s interest shifted from light verse to memoir. Her candid nonfiction revealed an emotionally turbulent inner life. Yet even in her darkest moments, she never lost the sardonic wit that characterized her poetry. In The Journey Is Everything: A Journal of the Seventies (Duke University Press, 1983), she recalled talking to her doctor, during her yearly checkup, about depression. “Have you tried pastoral help?” he asked her. “I said, ‘If you mean have I gone out to dance in the meadows? Or sought greener pastures among happy shepherds? No.’”

Writing provided an outlet and a refuge. When she wasn’t teaching, Helen retreated to her corner bedroom to write on her weapon of choice—the electric typewriter. (In later years, David contemplated trying to convert her to a computer. He soon thought better of it. This was, he reasoned, the same woman who once bought a new refrigerator because she couldn’t get the light in the old one to turn on.)

Helen’s life was marred by loss and tragedy—her parents’ divorce, her father’s early death from addiction, the deaths of her beloved husband Merle in 1964 and son Philip in 1980. Yet in her writing, she never stopped believing that love and happiness were in reach: “She wanted literature to be uplifting,” David says. Her last book, The Third and Only Way: Reflections on Staying Alive (Duke University Press, 1996), was a hopeful meditation on her lifelong struggle against unhappiness. “Believe that tomorrow is a day also,” Helen wrote. “Tomorrow and tomorrow.”

Bevington published 12 books. The best known is Charley Smith’s Girl (below left), which was nominated for the Pulitzer Prize.