Last year Lila Newman, AB’09, won the Claire Rosen and Samuel Edes Foundation Prize for Emerging Artists, which provides a one-year, $30,000 award to a recent UChicago graduate. Here’s what Newman did with all that money.

My dad is a sound-effects guy, and our house was like an elephant’s graveyard of effects. Like, whenever magic is portrayed on radio and you hear that wind-chimey sound, it’s just fishing line tied to old keys and nails. Flashbulbs in a glass create a good clinking-ice sound. My dad used to squeeze a box of cornstarch to create the sound of walking on snow. And he’d use goat toenails, actual goat toenails, for very heavy rain.

So I had the ability to play with sound at an early age, in the same way kids finger paint. When I was about seven, my teacher said, “Can everyone be quiet?” and I was like, “Well, light bulbs make a 60-cycle buzz, so there’s not going to be pure silence.” No wonder I ended up at the University of Chicago. It’s not a school for the not-nerdy of heart.

One of my first big acting roles was on A Prairie Home Companion, and now I write for it. I was just in season two of Amazon’s Alpha House, and I have a sketch comedy podcast, Barnum Effect, with Sarah Rosenshine (AB’09). Right now I’m working on a project about radio sound-effect pioneer Ora Nichols, for which I received the Edes Prize for Emerging Artists.

Nichols started off in vaudeville in the ’20s, and she ended up doing sound for films and radio. Apparently she was always running through the studios with handfuls of roller skates and cabbages. The most famous broadcast she worked on was Orson Welles’s War of the Worlds. For the sound of Martians turning themselves inside out, she used jelly and a rubber glove.

After that, she and Welles worked together on another radio play, this one set in the desert. She wanted to use a box filled with sand for the sound effects, but he wanted to put sand on the floor for the actors to walk on. He was like, “No, no, I don’t want something that a cat uses to go to the bathroom in my play.”

He called her a crackpot, and she left, and they did end up putting sand from C oney Island all over the floor. But their technology couldn’t pick up the sound. They had to take all the sand out, and someone got Nichols and told her Welles would apologize. She came back, and Welles sidled over and muttered, “I’m sorry.” She said, “Orson Welles, you insulted me loudly enough for everyone to hear, and you must apologize just as loudly.”

What I’m doing is an original performance piece about her, using binaural recording. Binaural sound is 3-D sound—it has height, depth, and width. If people listen to a binaural recording of a haircut, they look behind them and get tingles and scratch their head. It really is an uncanny experience. 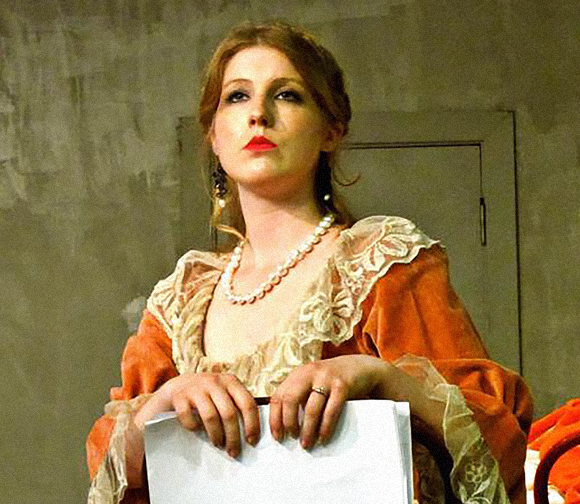