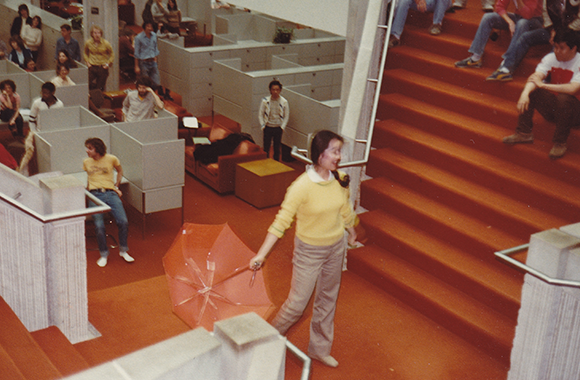 In the final analysis

This issue we asked alumni to share their favorite (if that's the right word) memory of finals week.

In 1982 one of my college friends, Keungsuk Kim [now Sexton, AB’84, JD’87], was dared (or maybe she lost a bet, I don’t remember) to perform “Singin’ in the Rain” on the staircase at the Reg during peak finals week study time. A recent Miss Wisconsin, she put her whole heart into her performance and actually managed to capture the attention of many stressed-out students for a few minutes.—Amy Christianson Goerwitz, AB’83

I’ve completely blocked each and every one of them from access.—Christine (Dickinson) Matsushita, AB’80

To keep things lively (and well sugared) during finals studying, my friends and I bought a ton of Reese’s Peanut Butter Cups from Bart Mart. After eating each piece, we made animal sculptures out of the aluminum foil. It was a proud and stomachache-inducing moment when we finished the bag. Reese’s Cup art = finals week sanity.—Colleen Belak, AB’12

The realization that I needed to start studying in groups hit me in my second year of physics at UChicago. After a few weeks, my study group started to coalesce: four varsity athletes and four fraternity and sorority members.

During winter quarter we took our hardest course up to that point, Intermediate Mechanics. While preparing for the final, we talked about test-taking strategies. We soon realized the key to success is comfort. A few minutes later we had placed an order for bright red “UChicago Physics” tank tops. As an expression of solidarity, we all wore these tank tops during the final. From that point on, our study group became known as the “Physics Bros.”—Sam Pennisi, AB’14

My fondest finals week memory is one of my fondest memories of the College, period.

Around 10 p.m. the night before winter quarter exams begin, students in Regenstein emerge from their cubicles and gather around the balcony on the second and third floors. An excited buzz begins to fill the atrium. At an undisclosed location in the stacks, members of the men’s and women’s track teams nervously strip to our running shoes in gender-designated aisles. A hush falls over the team. Three, two, one ... and we’re off. Around the library we run, fast enough (we hope) to remain unrecognizable to our peers, who now pack the balcony and surrounding floors.

Mustering up the courage to participate in this annual (and not administration-condoned) tradition is my proudest moment at the University. I have no recollection of my exams that quarter, but I will never forget the exhilaration that came with conquering my self-consciousness and offering some comic relief to my peers. Crescat scientia; vita excolatur!—Hannah Radner, AB’12

Every year my birthday fell during finals week, so most birthdays I was in the library diligently studying or writing a paper. Once a group of friends brought a cupcake with a lit candle and sang a whispered rendition of “Happy Birthday.” Other students studying at tables surrounding mine joined in singing—and then immediately went back to their books.—Daniel Urbina-McCarthy, AB’09

There’s a story of finals week that I have made sure to pass on to my kids, as it provided a good life lesson. I had an economic history class with Professor David Galenson. At the beginning of the course, we received our list of assigned textbooks, which included one on American colonial history. However, throughout the quarter, we never received any assigned readings from this book, nor did our professor ever mention it in class. So of course, very few of us bothered to read it.

In a stroke of good fortune, about two days before my final I happened to talk to a friend who had taken the class the previous year. He told me, “You know Galenson always includes an essay question based on that book, right? It’s his way of saying that U of C students should have a thirst for knowledge and not just read what was specifically assigned.”

So now I had to read a 500-page textbook in 48 hours. Which I did, and sure enough there was a question on the test. Thanks to the tip from my friend, and many hours sequestered in the basement stacks at the Reg, I nailed the question and secured what I felt was a much deserved A.—Carl Stocking, AB’82, MBA’83

One finals week I got sick with the flu. Because a particularly nasty strain was going around, the health center asked that I keep to my room to avoid getting others sick. This turned out to be amazing. My professors were super accommodating and offered me extensions on my exams and papers without my asking, and let me take finals from my room when I insisted I wanted to just get things done. I even had a TA come to my dorm to drop off and pick up a physical copy of a math final that needed to be handwritten. I’m pretty sure he sprayed it with Lysol afterward, but it was still a nice gesture.—Grace Chapin, AB’11

I sing the praises of Shin Ramyun instant noodles, a drip feed of which kept me sentient during the unholy terrors of finals week. A few friends and I decided we were unstoppable geniuses who worked best under pressure, so we started on our papers at midnight. Due date? The morning of. My blood ran red with MSG, and luckily the M stood for “magical.” By daybreak, I had in my hands super-serious commentary on Fay Wray’s character in the 1933 black-and-white King Kong.—Helena Lang, AB’06

At the end of winter quarter my second year, I realized I had no in-person final exams—only four papers. So I changed my flight home and spent finals week in my pajamas, writing college papers in my childhood room.—Andrew Green, AB’13

Every 11 weeks, for four years, I dreamed I was speeding down a hill with no brakes. Then I graduated from UChicago. I didn’t have the dreams again until seven years later, when I was about to defend my PhD at Brown.—Afi (née Stephanie) Scruggs, AB’75

During first year, I would pull all-nighters to write papers. It was, and still is, one of the ways I work best. The first time I stayed up all night writing a paper in my house lounge, I took a break to watch the sun rise. This became the inspiration for my Facebook photo album called the “All-Nighter Series,” a set of really beautiful sunrise images from the Wendt House windows that face east.—Sherraine Ashley, AB’14