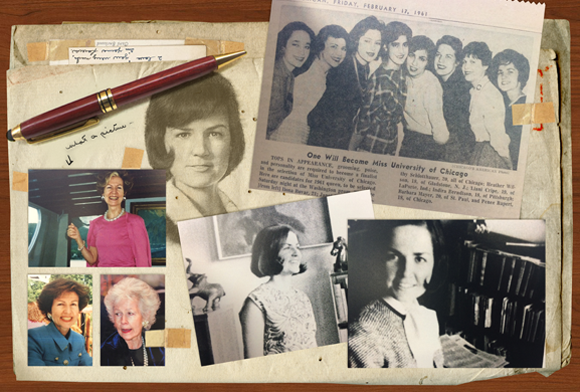 In January the South Campus Residence Hall, which opened in 2009, was renamed Renée Granville-Grossman Residential Commons. The name recognizes the largest bequest in University history, a $44 million gift from Renée (Rupert) Granville-Grossman, AB’63. The building, at 6031 South Ellis Avenue, is the University’s largest residence hall, with more than 800 students.

The gift was a total surprise not only to the University but also to her family and closest friends. The only person who knew was Carl Klotz, JD’64, who drew up her will. When Granville-Grossman told Klotz she wanted to divide her money between UChicago and the Tate—she was a passionate collector of contemporary art—he said, “Are you sure you want to do that?” She said, “Yes.” That was the end of the discussion.

Born in 1943, Granville-Grossman grew up near campus, first in Kenwood and then South Shore. She came from a family of alumni, including her mother, Irene Heineck, PhB’30; her aunt, Camille Heineck, PhB’33; and her uncles, Aimé Heineck Jr., SB’38, and Joffre Heineck, SB’40. Her grandfather, Aimé-Paul Heineck, a well-respected surgeon and pillar of Chicago’s French community, had wanted all of his children to attend UChicago; the boys should become doctors, the girls should teach French. Granville-Grossman’s mother, a French teacher in the Chicago Public Schools, did just that. Granville-Grossman spoke French fluently because her mother spoke it to her at home.

Following the family pattern, in fall 1960 Granville-Grossman, then Renée Rupert, enrolled in the College. A linguistics major, she took courses in French and Russian as well as in education and art. After graduation she attended Columbia University’s Teachers College in New York. She taught elementary school briefly and then abandoned teaching to become a successful stockbroker at Wertheim, Bear Stearns, and other firms.

Through her job as a stockbroker she met the man she called her “soul mate,” Leonard Granville-Grossman, an English property developer with interests in both the United Kingdom and the United States. They married in 1981 and settled in Leonard’s apartment in London’s Sloane Square.

She worked briefly for Oppenheimer in London before giving up her career. The Granville-Grossmans, who had no children, traveled the world and collected art together, focusing on 20th-century British works, in particular small sculptures. Granville-Grossman happily adopted the lifestyle of the English upper class; she went to Wimbledon and Ascot and once met Prime Minister Margaret Thatcher.

When her husband died in 1994, Granville-Grossman took over his role on boards managing various property interests and threw herself even more deeply into art collecting. In the late 1990s she moved back to New York to care for her elderly mother. Granville-Grossman died of cancer in 2012.

Why would she keep such a generous gift secret? “I can’t begin to explain,” says friend John Gibbons, who knew Granville-Grossman for decades. “There are parts of Renée we’ll never understand.” A cousin, Margaret Ondov, speculates that she “wanted to contribute something to organizations that she had loved in a big, spectacular way.”

“She had a great sense of humor, a twinkle in her eye. She was a bit mischievous,” recalls Richard Hamilton, director of the Tate Americas Foundation. Despite their close friendship, Granville-Grossman had said nothing to him of her planned gift. Hamilton suspects she gave her money to the two institutions that had brought her the most pleasure in life: “She must have been very happy during her time at college.”