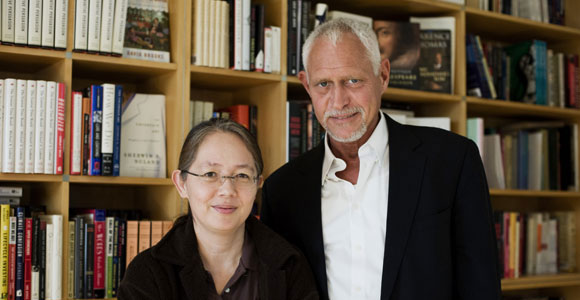 As first-years, Lynn Chu, AB’77, JD’82,and Glen Hartley, AB’77, met in Social Sciences 101—and began a conversation about books and ideas that shows no signs of ending.

Hartley recalls the course’s “wonderful teacher,” Donald Levine, AB’50, AM’54, PhD’57. He has even more vivid memories of his feisty fellow Burton-Judson resident. “Lynn was always very good at debating,” he says. “I’m a very argumentative and opinionated person,” Chu agrees. He studied English, while she majored in geography and went on to the Law School. A shared love of the written word brought them together, personally and professionally.

The agents are trailblazers in the book industry. Chu blames their agency for “perpetrating the formula” of the book proposal after a page of advice for their clients got handed around and began to be used by first-time authors. Chu is known as a tough negotiator, to the glee of clients and, sometimes, to the chagrin of editors. Publishers “are not worth three times the author in terms of the contribution to this enterprise,” she bluntly says about electronic royalty models. She’s worked hard to help scuttle the recent Google Book Search settlement, arguing that the terms were unfair to authors.

Chu and Hartley are passionate about their work but got into it by something of an accident: Hartley wanted to see a favorite writer back in print. He was marketing manager at Cornell University Press when he discovered English novelist-poet John Cowper Powys. “I eventually tracked down the rights to the agency in London, and that agent granted me the right to represent the estate in North America,” Hartley explains. “We sold two books to Harper & Row, and Lynn negotiated those contracts while she was in law school.”

When Chu graduated, the pair moved to New York. She worked as a lawyer in corporate securities while he continued in publishing, first at Simon & Schuster, who asked him to stop moonlighting as an agent, and then Harper & Row. There Hartley helped open a new division devoted to software, but the publisher folded it without even releasing its star product: the late science fiction legend Thomas M. Disch’s Amnesia, billed as the first interactive novel and eventually published by Electronic Arts. “It was before its time,” Hartley says of the work. His section shuttered, he decided to change careers—with his wife. Writers’ Representatives was born in 1985.

“Thanks to the University of Chicago, I had a great deal more sophistication than anyone else out there. Every publisher was a mess at the time. The contracts were ridiculous,” Chu recalls. The legal documents tended to be one-size-fits-all. “We saw that we could do a lot in terms of ginning up competition, using the market to serve our clients’ interests better.” Agents and publishers alike have attained a higher level of sophistication in the past two decades, she says.

Writers’ Representatives has many of the country’s top conservative intellectuals as clients. But Chu and Hartley weren’t on the right themselves when they started. “Glen and I both realized that we were not conventional left-liberals by approximately 1986,” Chu says.

Their political transformation was a reaction to intellectual currents in academia. “I never had any exposure to structuralism or deconstruction as an English major,” Hartley says. But at Cornell, he promoted some of the earliest books on the subjects published in America. “I was fascinated at first, but then sort of repulsed.” When researchers discovered four years after Yale deconstructionist Paul De Man died in 1983 that he’d written for Nazi-controlled newspapers in his native Belgium, the couple asked a friend from Ithaca, poet David Lehman, if there was a book in the scandal. “And he wrote a brilliant book, called Signs of the Times, that was one of our early sales to Simon & Schuster,” says Hartley. Around the same time, some scholars wanted to extinguish “the whole concept of a canon, which is like doing away with the Core curriculum,” Hartley notes. “That led us to Harold Bloom and our suggestion that he try to write a book on the canon. That became his book The Western Canon.”

That’s a rare occurrence, however. Other clients speak of Hartley and Chu glowingly. “They’re part of the literary world, not the world of percentages and negotiations and deals,” says David Gelernter, a professor of computer science at Yale and cultural commentator whose books include Drawing Life: Surviving the Unabomber. “Lynn has a lot to say and speaks passionately and prophetically—she’s kind of a literary prophet. Glen is quiet until he has the exact truth in his sights and then speaks memorably. They’re one of the leading literary couples in New York—in other words, in the world.”

Andrew Ferguson, a senior editor at the Weekly Standard, refers to them in the acknowledgements of his latest book, Crazy U: One Dad’s Crash Course in Getting His Kid into College, published last year: “They combine to create the ideal agent with a one-two punch that strikes fear into the stony hearts of publishers and inspires gratitude in the trembling heart of a writer.”

The couple work and live in a light-filled apartment in the West Village with an Airedale, a wirehaired pointing griffon, and a new chocolate Labrador retriever puppy. Books are everywhere, the overflow spilling into the hallways. “The physical reality of books is still relevant,” Chu says with a wry grin. Hartley says their life is “like a continuing education. Lynn and I continue to debate like we would have in classrooms in Chicago.” Chu differs with that assessment, a little. “Glen has good taste in books. Anything he likes is good.”

Chu and Hartley can strike “fear into the stony hearts of publishers.”