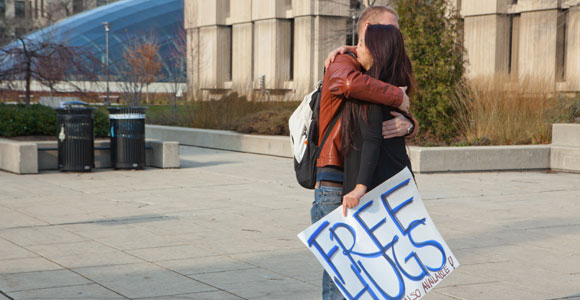 On the Friday before finals week, Wang organized her second “free hugs” day of the year outside the Regenstein Library.

How long have you been hugging people today?

I was going to start at 9 a.m. at Pierce, but people don’t hang out there at nine. So I just sat there with my sign and wrote an essay on Artistotle’s four causes.

I did it with a group of strangers and friends. There should have been 40. The core group was maybe ten, who did it for the entire day.

I was having a bad week, the week before. So I decided to just make a Facebook event.

What percentage of people stop?

Then there are people who say, “This is exactly what I needed, thank you so much. This is a great day to have a random hug from someone.”

Have you ever felt obligated to hug someone you didn't want to?

No, that’s been OK. Hugging’s not very intimate to me. I do the Argentine tango, and we kiss people on the cheek.

Who are the least likely to accept a hug?