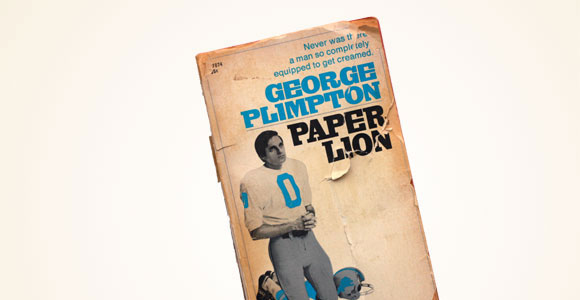 Staff writer Benjamin Recchie’s original idea for “Ineligible Receiver,” his feature about the varsity football team, was an instant hit: he proposed to pull a George Plimpton by suiting up and practicing with the Chicago Maroons, getting a good look at them from the inside. To his editor—a sports and sports writing fan plus a native Detroiter with a battered copy of Plimpton’s Paper Lion on her bookshelf—the notion was pure catnip.

Plimpton’s classic work of sports journalism has a luster and life to which football is almost incidental. In 1963, the longtime editor of the Paris Review went to training camp with the Detroit Lions as a player-reporter on assignment for Sports Illustrated. He had previously pitched an all-star game with the New York Yankees and later played goalie for the Boston Bruins, experiences he captured in the books Out of My League (1961) and Open Net (1985).

You learn a lot about football reading Paper Lion, but if the sport leaves you cold, the book can still hook you. Plimpton’s first interest was people, and he watched them ply their trades to see them clearer. The more we understand his characters’ work, the better we fathom them—and this turns out to be motivation enough for even the sports-averse to absorb quite a bit about football. Paper Lion lives through its characters and their frailties and powers, which it records with an attention so intense, it’s a kind of love.

Hall of fame defensive back Dick “Night Train” Lane is one such character. A cocky but meticulous craftsman, Lane warms to describing the art of intercepting footballs—a deep game that begins plays earlier. Like a pool-room hustler, Lane reveals, he lulls a receiver into complacency by being slow to the ball—“baiting him just a l’il bit”—only to pounce later. When Plimpton tries playing DB at practice, instructions ring out from the sideline, unmistakably Lane’s: “Scrabble ’roun’! Don’ regard the jukin’! Recovah! Disclose! Inform!”

It’s not just the Lions’ stars whose voices ring so clear. It’s also minor figures like the maintenance worker Bertha, who swept the high school dormitory where the players lived during camp and “wrote verse for the local paper—invariably about flowers.” Plimpton urges Bertha to expand her range and write about her work or about the players. He succeeds, at least, in getting her talking about her favorites, like tackle Gil Mains. “He’s gone now, but he was … oh my! ... Oh, he was everything that was the devil.” A Plimpton-worthy voice graces “Ineligible Receiver,” too: that of Dick Maloney, the Maroons’ head coach since 1994.

In October, we learned that the 2011 NCAA is not the 1963 NFL, and that Benjamin’s participation would be limited to donning the equipment and shadowing the team. That didn’t keep him from getting a good story about the Maroon scholar-athletes. In September, by coincidence, the New York Times also published a feature about UChicago football, “Where Football and Higher Education Mix,” which found athletics and academics well balanced here. The history of Maroon football, the Times wrote, “presents its own kind of parable: going from all to none before settling on a path in between.”