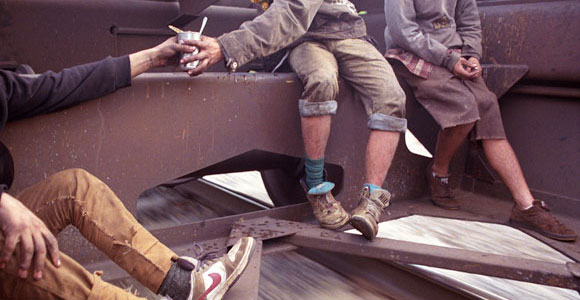 An intrepid student devotes her summer to examining an itinerant subculture.

Last July, Beth Topczewski, ’12, packed a few essentials—a sleeping bag, clothes, Pop-Tarts—into her 2000 Toyota Corolla and hit the road. With the help of a $900 research grant from the Dean’s Fund for Student Life, she spent the next two months on the move, traveling from Chicago to California, with stops in Michigan, Wisconsin, Minnesota, Iowa, Wyoming, Colorado, Utah, and Nevada. Sometimes Topczewski stayed at a motel, but more often slept outdoors in national parks or in the graffiti-covered, litter-strewn encampments that provide refuge for the subjects of her research: train hoppers, the contemporary version of Depression-era hobos who illegally traversed America via railroad.

Topczewski began her undergraduate studies at Southern Methodist University but decided to leave in 2007 and moved to Chicago, where she met Andrew Cone, SB’06, who is now her husband. Cone introduced her to train hopping, which she defines as boarding a freight train surreptitiously and settling into a discreet nook. Topczewski remembers the excursions vividly: “You find yourself thinking in terms of a completely different network that is superimposed on the world you already know. You start noticing different things—gas stations, police stations, weird industrial structures—because these kinds of things are clues to how the railroad in that area developed.”

Topczewski rode only occasionally, but she encountered other people hopping trains as a way of life. She wondered about the motivations behind their itinerant lifestyle and how it relates to mainstream American society. After enrolling in the College in 2010, she began looking for scholarly literature on train-hopping culture. She found nothing, so she decided to research it herself.

Topczewski didn’t jump trains herself on the research trip, but spoke with more than 100 people who do. She initially planned to drive along a train line but discovered that it was more fruitful to head straight for places where train-hoppers congregate, such as Minneapolis. She had no difficulty finding research subjects. “There are a lot of places where there’s no reason to go unless you want to hop a train,” she explains. She also frequented cafes and punk-rock shows—popular train-hopper hangouts—and walked city streets keeping an eye out. Topczewski quickly came to recognize the train-hopper aesthetic: multiple piercings, rail-related tattoos, backpacks covered in “a very specific kind of dirt, a greasy grime.”

It’s a young, primarily male subculture, Topczewski discovered: Most of the train hoppers she met were between 16 and 34, and 75 percent were male. Almost all were Caucasian. Females tended to travel in groups or with a male companion, whereas males often rode alone; many traveled with a dog.

Topczewski decided to focus her research on subjects under 34, who usually refer to themselves as travelers, sometimes as crust punks, gutter punks, street kids, or crusty kids. “Because I am young myself, it was much easier for me to find train hoppers who were also young,” she says. “And it’s a group that is more well defined than older train hoppers,” who have often curbed their train hopping to assume outside responsibilities.

Many of the travelers Topczewski encountered were homeless; they described feeling restless or uncomfortable within mainstream society. A teenage girl told Topczewski she left home and began train hopping because she felt extreme anger and didn’t know why. Although many travelers said they were burnt out on the practice, they showed few signs of stopping. “It’s an addictive activity,” she says. “There’s this game of beating the system, and a feeling of ‘I can go anywhere.’”

With this freedom comes a stressful, dangerous lifestyle, Topczewski discovered. Social ties, even intimate ones, appeared to develop and dissolve very quickly, and physical violence seemed an expected part of life, especially in settling disputes within the group. The travelers occasionally used drugs and frequently consumed alcohol.

Most survived by panhandling—a distinction between contemporary train hoppers and the hobos of yore who traveled from place to place in search of work. Topczewski was struck by how generously passersby provided food, clothing, and money. Panhandlers directly asked for money, played music with a collection box nearby, or held signs with messages like “clever but not that clever” or “too ugly to prostitute.”

This year Topczewski is writing up her findings for sociology professor Linda Waite, who has guided Topczewski’s research and provided her with additional undergraduate research funds. Topczewski is also formulating potential topics for future research. One possibility is a demographic study comparing travelers to homeless youth as a whole, she says. Some aspects of traveler culture, Topczewski explains, may illuminate broader issues in American culture: the generosity that people show toward travelers, for example, could shed light on motivations behind altruistic behavior. Or, she says, since travelers are constantly meeting other itinerants and forging new bonds, their behavior could help inform more general studies on how social and family networks form.

Once Topczewski finds her topic, she’ll develop a methodology for the research she hopes to carry out next summer. “This experience gave me enough social contacts and social cred to make that possible,” she says. “It’s a delicate thing, because travelers often don’t trust people outside their community.”

Most train hoppers are young and male, Topczewski discovered. With their freedom comes a stressful, dangerous lifestyle.