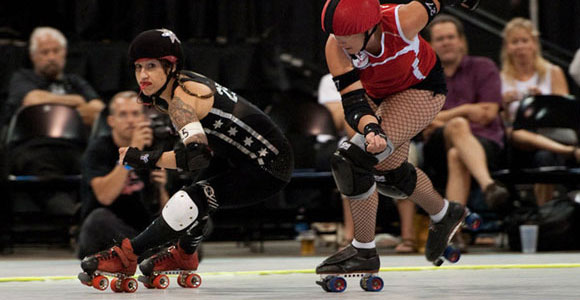 When Jamie Ramsay’s teammates describe her, the word “sweet” comes up a lot. So does “ruthless.” Ramsay, AB’99, known in the world of flat-track Roller Derby as Varla Vendetta, is a former team captain of Chicago’s Windy City Rollers and one of the toughest players in the country. Five-foot-two, with a dirty-blond ponytail and a Hindu war goddess tattooed down her left arm, she’s earned a collection of league MVPs and one 2005 award for being “most villainous.”

In early December, Ramsay was one of 28 skaters from around the nation, and the only player from Chicago, chosen to represent Team USA in the first Roller Derby World Cup in Toronto, which the Americans swept, winning all five of their bouts. “She’s so sweet—she doesn’t even curse,” says Chicago teammate Erica Jones, who skates under the name Hoosier Mama. “She’ll do anything for you, and she has time for everyone. She’s this little sweet thing off the track, but on the track she’s a tiny little terror.”

The way Ramsay tells it, Roller Derby ignited a spark she never quite knew was there. And once it caught fire, it burned hot. During a bout four years ago, she took a hit from another player, fell hard, and broke her collarbone. The injury was so bad that doctors had to insert a metal plate into her shoulder. Still, that night she kept hoping she could play the next day: it was the national tournament, and her team was in the finals for the first time. “I was like, maybe we could just tape it, and I could go,” she says. “That’s how crazy most of us are.”

None more than Ramsay. “She has a work ethic that borders on insanity,” says former teammate Melanie LaForce, a researcher at the University’s Center for Elementary Mathematics and Science Education, who skated under the name Riley Coyote before retiring in 2010. “Which is why, although she’s suffered some major injuries”—besides the clavicle, a broken ankle, tibia, and nose—“she just gets it taken care of and comes right back.”

Growing up in Arlington Heights, Illinois, Ramsay, now a photographer and designer for Time Out Chicago, rode horses and played pick-up football with her brother and his friends. At the College she did yoga and ran and considered going into medicine like her dad—a retired pediatrician who, as Papa Doc Vendetta, is the Windy City Rollers’ team doctor—before switching to art and graduating with honors. In 2004 she joined the Windy City Rollers, just as the league was forming.

“I saw a flyer, so I went to a meeting,” she says. “I didn’t even really know what Roller Derby was.” She’d heard about the faked fights and vaudeville spectacle of the 1970s, and she recognized that this new incarnation was something different and more serious: not just a show, but a sport. She liked the aggression, the exhilaration, and the push-yourself-to-the-limit intensity, the violence and intimacy of close physical competition. “There’s just something totally incomparable about getting hit in the face,” says Ramsay. “There’s just nothing you can do as a civilized person to withstand that rage.”

After practice one night in October—the Windy City Rollers play at the UIC Pavilion and practice in a West Side warehouse where the street dead-ends into railroad tracks—Ramsay stays late to lock up. As her teammates filter out and silence descends, she peels off her sweaty pads and talks about how Roller Derby has filled her life. How she’s proud of its players, here and around the world, women “just like me, busting their ass in roller rinks and parking lots in England and Finland and Argentina.” She feels honored to wear the Chicago flag on her uniform, to be part of the first World Cup. “I’m so fortunate,” she says, her eyes welling up. This is another paradox her teammates have gotten used to: tears. After wins, after losses, one of the toughest players on the team is often the one crying. “Oh, she’s an emotional girl,” says Jones.

The tears come partly from what the sport has taught her about herself—in the beginning, “I wanted to see if I was woman enough”—and partly from what it means to women like her off the track. “Roller Derby is beyond a sport,” she says. “A lot of girls, maybe they drank or smoked, or they didn’t know what they wanted in their lives. There’s incentive here to kick bad habits, to get out of bad relationships. You find out what you can do physically, and it translates to other parts of your life. That’s why people keep playing for eight years and break bones and still want to go out there every night.”