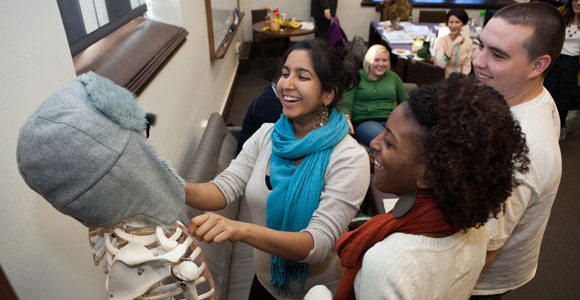 Future patients of America, meet the doctors you’ll be seeing in 2022.

As college students, they do what you might expect to get into medical school: major in biology, survive organic chemistry, prep for the MCAT. Many at Chicago are also pursuing unexpected, less direct paths to health careers. They’re practicing mindfulness, going to the theater, and delaying entrance to graduate programs—all with help from Chicago Careers in Health Professions (CCIHP), one of eight Chicago Careers In... programs designed to prepare undergrads for professions from law to journalism.

Consider Joel Saeedi, AB’11. He might be your internist someday, but this year he’s a College admissions counselor. Saeedi began thinking about a medical career as a teenager, watching his grandmother struggle with Alzheimer’s disease. “I had this idea that after you finish college, you’re supposed to go to medical school immediately,” he says. “That was the default—I didn’t think about why.”

Through CCIHP, Saeedi attended seminars on the medical school application process, met with advisers, and completed annual questionnaires that felt as rigorous to him as an actual application. In the process he discovered that “I wasn’t ready. I needed more time to develop, grow, and mature.” He believes his gap-year job will help him hone his people skills—and the break from school has already freed time to work on applications to MD programs.

Ayesha Crockett, ’13, started college wanting to pursue a PhD in biology. “I had no intention of being a doctor, or so I thought,” she says. Yet doing bench work in the lab, she realized that doctors “get to interact with patients and see real-time progress. I wanted to know who I’m affecting and how research is improving someone’s life.”

Crockett started taking premed courses and as a Katen scholar—named for University trustee Karen L. Katen, AB’70, MBA’74—did summer research on neonatal diabetes. She explored the social context of medicine and may teach school before working as a doctor in an underserved community. “My problem,” says Crockett, “is narrowing the possibilities down.”

Such atypical stories cheer J. Violet Gannon, assistant dean of the College and CCIHP director, who wants students to explore all the options as they move from the liberal arts to health careers. CCIHP encourages students to consider futures as nurse practitioners, dentists, public health advocates, researchers, or vets. “Do what you love and what you’re good at,” Gannon tells them, “rather than what you think you should do.”

The program’s broad approach grew out of a practical problem. Nationwide, 46 percent of applicants are accepted to medical schools but four years ago, Chicago’s acceptance rate was significantly below that number. CCIHP has turned the situation around: last year, the College placed 77 percent of applicants into graduate schools in health or medicine. Acceptance rates have increased partly because students set their sights on schools that are the right fit, says Gannon, instead of taking a “Harvard-or-bust” attitude. CCIHP also organizes popular study groups for tough courses like general chemistry. Its team-taught MCAT preparation course covers basic science but also includes a session on deep breathing and mindfulness.

Increasingly, medical schools want applicants with life experience. So while Saamia Masoom, ’12, spent a summer volunteering at a cancer hospital in Bangladesh, she wants to work in health-care consulting or another field before starting med school.

Her classmate Arshiya Fazal, ’12, studies both biology and statistics. Because she expects to face complex ethical, financial, and policy decisions as a physician, Fazal believes a flexible, open attitude will be crucial. “The second you feel comfortable as a doctor, you’re doing something wrong,” she says. “I want to be that person who is comfortable with being uncomfortable.”

To encourage work-life balance, CCIHP organizes social events, a book club, and theater outings. The goal is to help students connect scientific knowledge to human experience—and simply have fun. Last fall a group saw Seven Sicknesses, an adaptation of Sophocles’s tragedies set in a hospital. “I don’t know how it’s going to relate to medicine,” said Fazal before the play, “but I’ll go.”