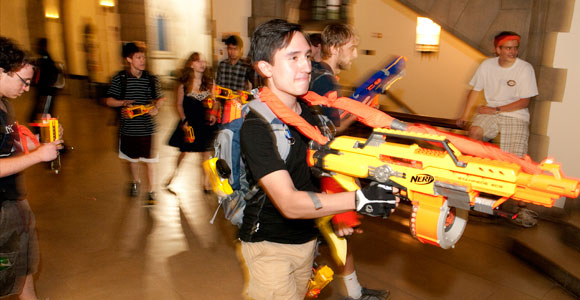 by Carrie Golus, AB’91, AM’93 | Photography by Lloyd Degrane

Twice a year, the Zombie Readiness Task Force stages a weeklong game of Humans vs. Zombies on and around the campus. This fall quarter, more than 200 students joined the conflict, which culminated in an epic battle for Stuart Hall.

The rules of the game are simple. Zombies try to tag humans; humans fight them off with Nerf guns. A human, once tagged, becomes a zombie and must wear their bandana zombie style (on the head) rather than human style (on the arm).

Everyone starts off human except for the Lead Zombie—this year played by “Real Snake,” a.k.a. Christopher Dewing, ’14, with noteworthy aplomb.

CAPTAIN JESSICA GOODMAN, ’14: The zombies always win. But this year’s Lead Zombie was the best zombie by far. He killed 26 humans. The previous record for a Lead Zombie was nine.

LIEUTENANT EDWARD WARDEN, ’14: He should have had a cloak and a scythe. He completely massacred South [Campus Residence Hall].

REAL SNAKE: I had some nasty tricks. South has these big lounges. I just ran at a dead sprint through the lounge with my hand stuck out. Other times, I hid around corners or behind doors. Once I lay on the pavement behind a dumpster.

CAPTAIN GOODMAN: He did no homework that week. He was very dedicated.

EDGAR GONZALEZ, ’14 (LEAD ZOMBIE LAST SPRING): The best strategy is to kill your friends first. Then once you build a zombie army, you can get signed in to different dorms.

How did the humans fight back?

MAJOR DEAN COONEY, ’14: We had an organized human resistance movement. Humans would escort each other through unsafe areas. One tactic is to walk in a circle, with people facing different directions.

REAL SNAKE: Out of 200 or so players, there were only three humans left by the Final Battle. So some zombies had to traitorously switch back to the human side.