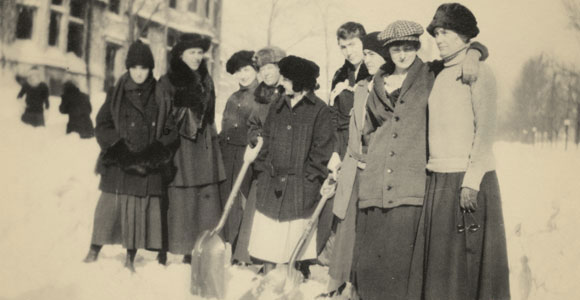 Ah, winter in Chicago … the white stuff, the ice, the wind chills of 80 below. We asked alumni to share their favorite snowy memories.

While tromping through the snow on Woodlawn Avenu close to my apartment, I looked down one of the numbered side streets to see a small tree that had fallen across a car. Poor guy, I thought—the roof was dented, windshield cracked—until I realized it was my car under the tree.

To add insult to injury, after I got a friend to help me pull the tree off and worked out details with the insurance company, I went to drive the car to the auto body shop, only to find a ticket on my car. Apparently you can’t park a car with a broken windshield on the streets of Chicago.

As a first-year student in Hitchcock, I remember visiting the dorm room of Christian Doll, AB’06. On the desktop of his computer, he had a picture of the Midway Plaisance covered in snow. “Oh, I love black and white photography,” I told him. What a sense of dread I felt when he responded, “That's a color photo.”

It was January 1970, I believe—the first day of Winter Quarter. We had to show up in class with our punch cards to complete registration. It was incredibly cold and windy that day; I vaguely remember a report of wind chill of –126. I lived at Blackstone Hall at the time. We gathered downstairs to walk to Cobb Hall in groups to break the wind for each other. In those days, the tables in classrooms were arranged in a circle. As we all started removing the layers and layers we were wearing, the pile of clothing in the center of the room grew to awesome proportions. Ah, the good old days. They don’t make winters like that anymore!

I lived in the Shoreland my freshman year. One night in January I had gone to the Reg to write a paper. I finished the paper right after a C bus had left. It was really cold and windy out but I didn’t feel like waiting for the next bus so I decided to walk back. The walk didn’t seem that bad but when I took my backpack off, the foam in one of the shoulder straps had gotten so brittle with cold, it snapped.

One year during college—I think it must have been 1986 or 1987—it snowed every single day of winter quarter. I would wake up and look out my window onto Woodward Court courtyard every morning and see the flakes come whirling down.

I can remember walking from the dorm to a once-a-year study break in Harper Reading Room at night and plowing through mounds of snow. (As luck would have it, I dropped my keys and had a terrible time finding them again.)

That winter quarter ended with a blizzard that closed Interstate 80. I almost didn’t make it back for Spring Quarter in time because of that blizzard.

February 1, the day that the blizzard of 2011 arrived in Chicago, was also my 41st birthday. I had hosted Joel Kleinman, AB'66, MD'73, PhD'74, who was speaking in the Human Genetics Seminar Series. After sending him off into the storm in a rented RAV4 (he made it back to his hotel), and putting my one-year-old daughter Ariela to bed, I called my friend Jason MacLean, assistant professor in the department of neurobiology, to see if he wanted to head out into the storm.

Five minutes later, we were walking east on 57th Street, headed for the Point. Visibility was almost nonexistent, but it hardly mattered because the wind was so strong we could barely open our eyes. There were already drifts of snow that were several feet deep in some places, but areas exposed to the wind were just bare ground.

We helped one motorist who had gotten stuck near to Powell's, but couldn't do much for the number 55 CTA bus that was stuck in front of the Museum of Science and Industry. As we made our way to the 56th Street underpass we saw police cars and fire trucks blocking the entrance to Lake Shore Drive. We assumed there was an accident nearby; it didn't even occur to us that all of LSD was closed and that hundreds of motorists would spend the night stuck on the Drive.

We only spent about ten minutes at the Point—the wind was so strong that we could barely stand up and it was hard to open our eyes or to shout over the howl of the wind. There was a constant hail of frozen ice, presumably blown off the lake, that stung when it hit exposed skin. We couldn't see anyone else, but every time there was another round of lightning and thunder we could hear screams of approval from several directions. We retreated west on 55th and stopped in almost immediately at the Cove; after we spent about five minutes taking off winter clothes and brushing off show, they gave me a free beer for my birthday (yes, they carded me first). As we relaxed at the Cove a guy stuck his head in to tell no one in particular about the lightning and thunder and wind and snow. We gave him a collective shrug, he paused and then pulled up a barstool. It was a night when even in a neighborhood with more bookstores than bars, there wasn't much to do but have a beer and wait for the weather to calm down so we could start digging out. After all, the bookstores were all closed.

Quit complaining. In 1918, you had to shovel snow in a dress.