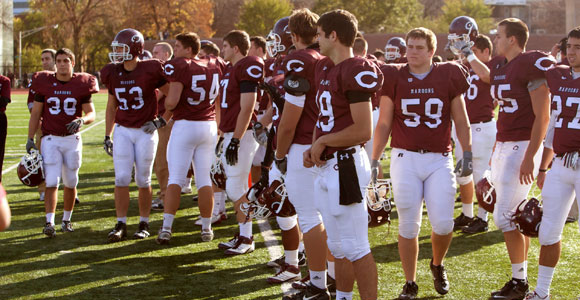 The Chicago way of football

A century ago, the University of Chicago was a titan of college football. This was the era of the original Monsters of the Midway, the team that could pack the old Stagg Field (now occupied by the Regenstein Library and Max Palevsky Residential Commons) to its 50,000-person capacity. They nursed a bitter rivalry with the University of Michigan; they trounced the vaunted Notre Dame four times, while never losing to them. Several Maroons went on to play in the nascent National Football League. Jay Berwanger, AB’36, was the first Heisman Trophy winner and the first player drafted by the NFL, although he turned the league down.

The Maroons were coached for 40 years by “the grand old man,” Amos Alonzo Stagg, who led the Maroons to the Big Ten football championship seven times (in 1899, 1905, 1907, 1908, 1913, 1922, and 1924). Stagg was a tremendously influential figure in the sport, inventing now-ubiquitous features such as the huddle and the center snap. (Knute Rockne once said, “All football comes from Stagg.”)

As the 20th century wore on, though, Chicago’s desire to go toe to toe with the finest football teams in the country clashed with its determination to maintain high academic standards for its players. (Unlike its opponents, Chicago never offered athletic scholarships.) Under the presidency of the decidedly antiathletic Robert Maynard Hutchins (who famously said, “whenever I get the urge to exercise, I lie down until the feeling passes”), Stagg was forced to retire in 1932. The Maroons began a slow decline in quality; in 1940, the University opted to drop football altogether, a principled response to the increasing professionalization of what was supposed to be an amateur sport. It abandoned the Big Ten altogether in 1946.

With the encouragement of athletic director (and later head coach) Walter Haas, football returned as a club sport in 1960; its mere presence was controversial enough that 200 students attempted a sit-in to disrupt a 1963 game. In 1969, Chicago returned to intercollegiate athletics, soon joining the NCAA as a Division III school, a lower level of play than in its heyday. At first, football was something of an exercise in absurdity, Jeff Rasley, AB’75, told Chicago magazine in 2006. The star attraction at games was an enormous kazoo; at a 1971 game, a refrigerator was crowned homecoming queen. Some days, the team couldn’t even muster enough players to fill out an entire practice squad. The new Stagg Field could seat 1,650, but Rasley recounted one game ending with just two fans in attendance.

As time passed, the team became a more serious enterprise, if not necessarily more winning. (It didn’t have a winning season until 1985.) When current head coach Richard Maloney accepted the position in 1994, he said other coaches asked him if he had “a death wish,” taking over such an undistinguished team. Over the next 18 years, though, he led the team to the University Athletic Association (UAA) championship four times, becoming the longest-tenured and winningest football coach at Chicago since Stagg. Champions in 2010, the Maroons were unable to repeat in 2011 (see “Ineligible Receiver” for more on that), but the indefatigable Maloney told me in no uncertain terms, “In 2012, our goal is return the UAA crown to the Midway.”