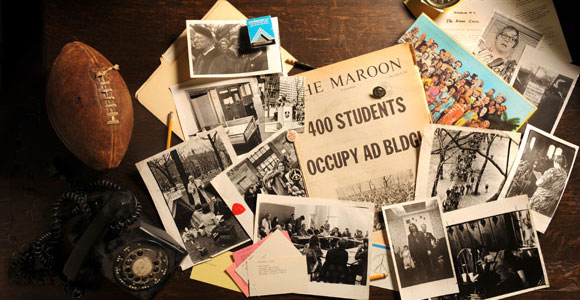 Herman Sinaiko and
the Sit-in of 1969

I never had the pleasure—perhaps mixed with pain—of taking a class with Herman Sinaiko (1929–2011). But years after I graduated, I did have the opportunity to write about him several times. I watched him enchant a group of freshmen during the opening class of Human Being and Citizen. A few years later, I persuaded him to model a T-shirt (though unfortunately his photo is not online) for an article on quirky UChicago T-shirts. He mentioned he had his own tribute T-shirt, “Herman Sinaiko Is a Rock Star,” so I interviewed him about that and photographed him incompetently.

I also talked to Sinaiko for an article about the 1969 sit-in of the Administration Building. I had discovered, while reading through the Maroon archives, that Sinaiko was among the few faculty members who held classes for students occupying the building. When I called to ask him about it, this is what he said.

What happened was, a group of students came to my office and asked if I would lead a discussion.

I was concerned about whether the kids had thought seriously about what they were doing and how they were doing it. So I told them I would teach a course on Plato’s Crito. It’s a very brief dialogue. It occurs after Socrates was tried.

His friend Crito comes to visit him with a proposal that he should escape from jail. Crito has worked out all the details; all Socrates has to do is agree. Socrates insists that he and Crito talk about what they are doing and why. It very rapidly turns upon whether it would be just for Socrates to escape from jail.

Socrates is quite clear that he thinks he was unjustly condemned, unjustly tried, unjustly sentenced to death, but that’s not the issue. The issue is, what does he do?

My memory was that I sat on a chair or something. They were all sitting on the floor. We didn’t take a vote or anything like that. We simply talked about the matter for an hour or two.

I’ll tell you a story because I think it was extremely interesting, and I’ve never seen anybody talk about this anywhere else.

After about a week or ten days inside the building, the students felt that nobody was listening to them. So they decided to have a meeting outside the building about their strategy. They got the lecture hall in the Oriental Institute. They packed the hall.

And then a very, very interesting thing happened. There was an explosion of rage. The students stood up as one and said, “Throw that son of a bitch out! Get him out of here! Who does he think we are? We’re SS men? We’re thugs? We’re crooks? We’re bums? Get him out of here! We’re students, and we are protesting as part of the University.” And the guy was asked to leave. They said they didn’t want him. They wanted no such crap.

It sounds funny now, and in a way it was funny, but at the time it was really striking that there was almost a total unanimity of opinion that as members of the University, there were things they were not going to do. Burning a rare book was one of them.

I think I may have been the only faculty member at that particular meeting. But what the faculty needed to hear, what the administration needed to hear, was that these were students. They were part of the University. They were angry, they were frustrated, they felt they weren’t being listened to, they wanted to make nonnegotiable demands, but they didn’t really mean it.

They were not thugs, they were not trying to force things. They wanted to have a discussion, to open up the issue for serious consideration, and they wanted their objections and their complaints to be heard, and to be taken seriously. But they weren’t out to destroy the University in the name of some higher purpose. They were fully committed to the University community. It never occurred to them that they should explain to the faculty and the administration that they were absolutely loyal students.

I thought the two things together—the talk about Crito, and the meeting in the Oriental Institute—really shaped my sense of what they were up to and what was important. It’s a complicated pairing of stories, in all kinds of serious ways.