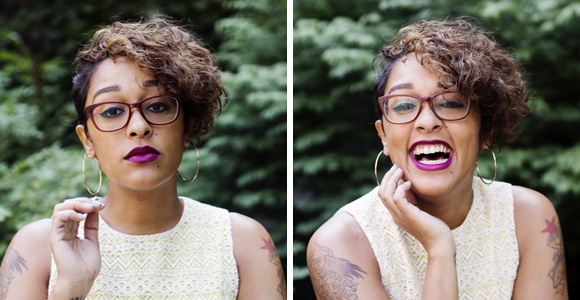 As a high school senior, Eve Ewing, AB’08, applied nowhere but the University of Chicago. “I was like, ‘Well, hopefully this works out,’” says Ewing, who later earned her doctorate from the Harvard Graduate School of Education. She’s now a Provost’s Postdoctoral Scholar at the School of Social Service Administration; she will join the faculty as an assistant professor in 2018. A sociologist of education who studies racism and inequality in urban public school systems, Ewing is also an essayist, poet, visual artist, and avid user of Twitter, where she’s known as wikipedia brown.

I grew up in Logan Square when it was primarily a Puerto Rican and Mexican community, but I went to a very white high school, and I had to travel a long way to get to it. My brother went to a different high school and had very different experiences. I swam in an Olympic-sized pool in PE and got to study abroad, and he sometimes had to wait to use the bathroom because the doors were chained up. It got me thinking early on: “What is the unfulfilled promise of public education, and for whom is that promise unfulfilled?”

Why did you apply only to the University?

Well, I didn’t have a counselor helping me with applications, and I was raised by my mom, who didn’t go to college. I was presumed to be a good student who would just figure this stuff out. All this stuff was really foreign.

After graduation you taught in the Chicago Public Schools. How did that lead to a career in sociology?

I taught sixth, seventh, and eighth grade in Bronzeville, and it’s one of the things I feel most honored to ever have done. However, it’s a job that can be demoralizing because every single day you’re trying to do the right thing for the young people in front of you, and every single day you’re aware that there are other people somewhere who are not doing right by them. That’s why I left, because I felt I needed to learn more about the forces that were influencing my classroom.

The big one is that my school was closed in 2013 as part of a wave of closings across the city. The CEO of the district said, these schools are so terrible. I felt she was telling a lie about my school because my school was a place of light and happiness and community. I felt that because it was a school on the South Side, she was preying on stereotypes so that people were happy to see it closed.

My dissertation research was about unpacking that sentiment. Basically, the schools were closed based on the idea that they were underutilized. The argument was that these buildings were built to have a certain number of students in them, and if they didn’t have that many students, it was wasteful. Well, if you go to the Lab Schools, having a small student-to-teacher ratio is considered a great thing. Why is it that when it comes to CPS kids, the way we measure the goodness of a school is how efficiently we’re packing bodies into a building?

How have you come to have more than 30,000 followers on Twitter?

I really don’t know. I’m pleased and a little bit puzzled that so many people invite me into their phones and onto their computers. The thing I like so much about Twitter is that people I’ve never met feel like they have a relationship of trust toward me. So when I talk about things that are scholarly or academic, they’re invested because of the conversation we had last week about their moisturizer or the new Ghostbusters movie or whatever. I think being active on Twitter also helps demystify the idea of the academic as this high-and-mighty person in the ivory tower. I want to be able to talk about what I do with all kinds of people.

How do you handle the stress of constantly thinking about racism and inequality?

When I was writing my dissertation, one of the sources I used was recordings of kids saying why their school should be left open—just children crying into a microphone saying, “Please don’t close my school.” And then the school would get closed. So, yes, it gets overwhelming and depressing.

How I deal with it is, number one, I’m very proud, as a black writer and a black scholar, to come from a tradition of resistance and critical inquiry. I take courage from people like Ida B. Wells, Audre Lorde, and W. E. B. DuBois. If Frederick Douglass couldn’t give up, I don’t have any reason to complain. Also, the things I write about are from my life and the lives of people I love. So I’m deeply invested in doing the work, even when it’s hard.

Eve Ewing's first book, When the Bell Stops Ringing: Race, History, and Discourse Amid Chicago's School Closures, is forthcoming from UChicago Press in the fall of 2018. (Photography by RJ Eldridge)