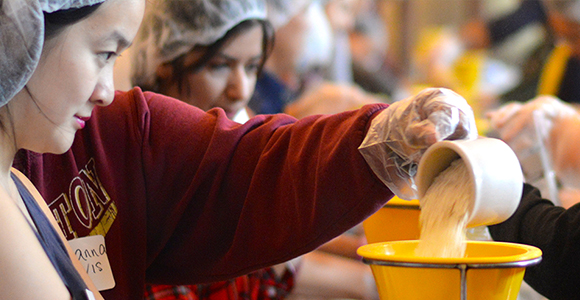 A score of service

The University Community Service Center (UCSC) connects students with local community organizations in need of volunteers. Through UCSC, founded by Michelle Obama in 1996 when she worked as UChicago’s associate dean of student services, students have found opportunities large and small to get involved. The Core ran the numbers on what UCSC has accomplished over the years.

Student volunteers at the first Martin Luther King Jr. Day of Service in 1997: 42

Volunteers at the 2016 Martin Luther King Jr. Weekend of Service:
356

Dollars allocated to student-led projects by the Community Service Fund since 1997:
831,727

Pounds of clementines consumed by the 15-person Alternative Spring Break team in March 2016, which students spent living and working at organizations throughout Woodlawn:
19

*The total number of Chicago neighborhoods varies depending on whom you ask, but most estimates put the total around 200.